The Government Data Centre (GDC) houses applications that support government services. Through this centralization, government data is easy to easy access by government bodies at the national and county levels. The GDC currently offers the following services:

3. Training & Capacity Building
Â  Â  - Through the GDC the Authority trains on the operations and management of other data centers.

4. Connectivity
Â  Â  - All clients connected to GDC can be able to communicate with each other as long as they have point of presence at the Data Centre.

Initiative primed to open up and share government datasets

Championing the uptake of ICTs in all counties

Bridging the gap between industry needs and talent

The Government Data Centre (GDC) houses applications that support government services. Through this centralization, government data is easy to easy access by government bodies at the national and county levels. The GDC currently offers the following services:

3. Training & Capacity Building
Â  Â  - Through the GDC the Authority trains on the operations and management of other data centers.

4. Connectivity
Â  Â  - All clients connected to GDC can be able to communicate with each other as long as they have point of presence at the Data Centre.

The highest legislation related to National Public Key Infrastructure in Kenya as per the current laws and regulations is â€œKenya Information and Communications Act of 1998 CAP 411Aâ€ revised under the â€œElectronic Certification and Domain Name Administration Regulation 2010â€. With these laws, both the ICT Authority and the Communication Authority are mandated and empowered to offer the NPKI Services in their respective distinct roles as indicated below.

Â  Â  - The ICT Authority as a State Corporation formed by the Legal Notice No. 183, cited as the Information and Communications Technology Authority Order, 2013 under the State Corporations Act, Cap. 446.Â Under Section 4 of the aforementioned Order, ICTA is mandated to amongst others, â€œpromote e-Government services, and facilitate optimal electronic, electronic form, electronic record and equipment use in the public serviceâ€. This implies that it is upon us as the ICT Authority to be the Government Certification Authority (GCA) with respect to the operationalization of the National Public Key Infrastructure (NPKI).

OTHER ADDITIONAL LAWS AND LEGAL FRAMEWORK INCLUDE

Â  Â  (a) Business Laws Amendment Act - March 2020
The recent developments to the scope of application of Electronic Certification services. The amendment has necessitated the amendment of KICA Section 83B (1) by deleting paragraph (c). The Business Laws (Amendment) Bill, 2019 was passed to law on 18th March 2020. Clause 13 of the Bill provides for the amendment of section 83B of KICA to provide for electronic means of authenticating and signing documents of title which was previously not applicable.

Â  Â  (b) The Public Procurement and Asset Disposal Regulations, April 2020
Section 59. (1) A digital signature certificate required by a procuring entity shall be obtained from a certifying agency licensed by the Communications Authority of Kenya for accounting officer, head of the procurement function, tender opening and evaluation committee, as the case may be.

The NPKI is a National Critical Information Infrastructure (NCII) and is recognized in the Â Vision 2030 blueprint as one of the ICT flagship projects aimed at authorizing and authenticating information systems in the country as well as to facilitate the rollout of e-government services and electronic transactions. The integration of Digital Signatures into various government services as a form of online security and identity will increase the level of trust between Government agencies, customers, business partners, vendors and ultimately the citizens spurring e-commerce and digital trade.

A Domain name is a case-insensitive string of letters, numbers, and hyphens that is used to define the location of a web service where they are used as pointers to IP addresses. Â A Second-level domain is a domain that is directly below a top-level domain. For example, in kenya.go.ke â€œ.goâ€ is the second-level domain of the .ke.The ICT Authority is the Registrar of the Government domains i.e. ".go.ke". The registration of the domain follows the following process;-
Â  Â  (a) The registrant ( Organization that owns/requesting the domain registration) writes an official request to the ICT Authority.
Â  Â  (b) Once the request is received, processed and approved, the domain is registered and the organization notified of the registration.
Â  Â  (c) For renewals, change of host or any enquiries on domains an official/email request can be sent to:websupport@ict.go.ke

The ICT Authority provides hosting services to MCDA's, the services are provided following an official request from the respective MCDA. Â Web application hosting is done in a shared environment, upon the official request of the MCDA.Â Once the request is received and approved then MCDA is requested to share the web applications files which undergo vulnerability assessment and subsequent hosting.

ICT Authority has been providing email-hosting services for MCDAs under the shared services framework. The shared platform runs on Zimbra Collaborative Suite email system and has been in place since October 2020 with over 100 MCDAs and 22900 email accounts hosted. The setup is a multi-domain configuration and we are able to onboard an unlimited number of MCDAs. It has been the interest of the government to have all official communication happen using official email addresses and the Zimbra setup has been a great enabler. This has removed the burden of managing an email system from the MCDAs.

How to get on-boarded on shared emails as a Ministry, County Government Department & Agency
Write a letter to CEO ICT Authority requesting for onboarding and a team will help you set up new accounts or migrate existing ones or send smail through: Â info@ict.go.ke

Huduma WhiteBox is an initiative of the Government of Kenya through the Ministry of ICT and Youth Affairs and the ICT Authority, geared towards catalyzing the successful growth of local ventures to, world-class status. The main objective of this initiative is to create a one-stop shop for anyone who wants to present, share or sell an idea, innovation, invention or solution to the government.Â

The Huduma Whitebox programme aims to assist Kenyan innovators by providing technical support, advisory services, access to market, networking opportunities, and access to incubation and accelerator facilities. This is all aimed at assisting innovators as they develop their innovations and launch them in the market. The program has a training component that provided instructive training to innovators on topical issues that affect the innovator. Currently, training is provided on intellectual property, business modeling, go-to-market product strategies, sourcing for funding and various technologies that innovators can use to accelerate the deployment of their innovations.

Huduma Whitebox processes have a systematic approach for receiving, prioritizing, evaluating and validating new ideas, to support them to grow and scale. As such, they have been extensively researched and validated thereby incorporating industry best practices of innovation management.Â
The program is in line with ICT Authorityâ€™s mandate to promote ICT innovations and enterprise.

Kenya currently boasts of being one of the most connected countries on the Eastern Coast of Africa. There are six submarine cables; TEAMS, EASSY, SEACOM, DARE, PEACE and LION that offer connectivity to the rest of the world via redundant routing. The shared services including the internet are accessed through the Government Common Core Network (GCCN). Inland, there is a backbone, metro and last-mile connectivity that has cut across the country through the government National Optic Fiber Infrastructure (NOFBI).

Subsequently, the Government network is connected to the international broadband highway through TEAMS, undersea Fiber cable providing an activated internet capacity of 10 Gbps. GoK has a 20% shareholding of 5.2 TB (current capacity of TEAMS). The current TEAMS cable has no redundancy and thus affects the service availability and compromises the quality of the service. There are other submarine Cables at the coast which are as follows: -
Â  Â  Â (a) DARE 1
Â  Â  Â (b) SEACOM
Â  Â  Â (c) LION-2
Â  Â  Â (d) EASSY
Â  Â  Â (e) PEACE 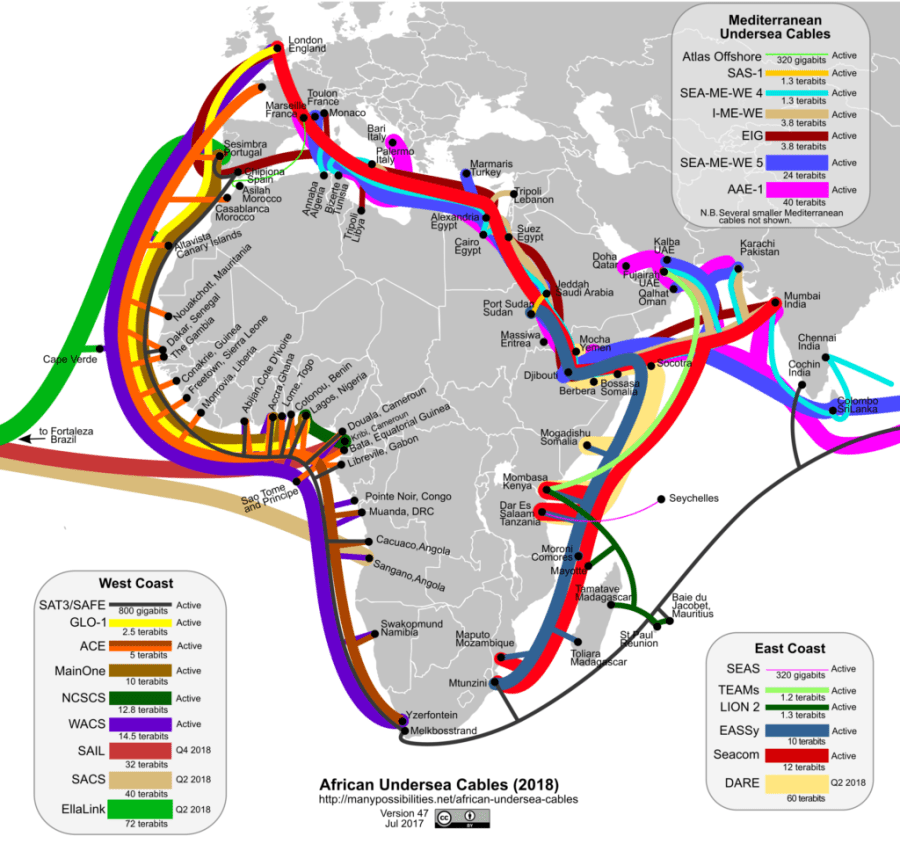 BACKBONE
The government in the last ten (10) years has built about 8900km of terrestrial fiber that has reached the sub-county level mainly connecting key government institutions and offices to offer service delivery. The government implemented the National Optic Fibre Backbone Infrastructure (NOFBI) in three Phases. NOFBI phase I was implemented between 2005-2009 and covered 4300Km of terrestrial fiber. NOFBI Phase 1 was largely a linear network and needed to be improved to make it more reliable and available; hence in 2010 the Government embarked of NOFBI Phase 2 in order to provide a more reliable, stable and efficient basic backbone network and also offer protection/redundancy leveraging on the NOFBI Phase I implementation
The NOFBI Phase 2 project work started in September 2014 and its scope included 2,100 KM fiber links and IP equipment to all the 47-county headquarters, the building of metropolitan area networks in all 47-county headquarters, and creating redundancy to the national backbone.
In 2017, the government embarked on NOFBI 2E network with a scope of 2,500 KM fiber links and IP equipment majorly covering sub-counties and creating sub-rings to further increase redundancy as shown in figure 1. Kenya has since achieved a more reliable, stable and efficient national backbone network that is being used by the Government at the National and County levels. 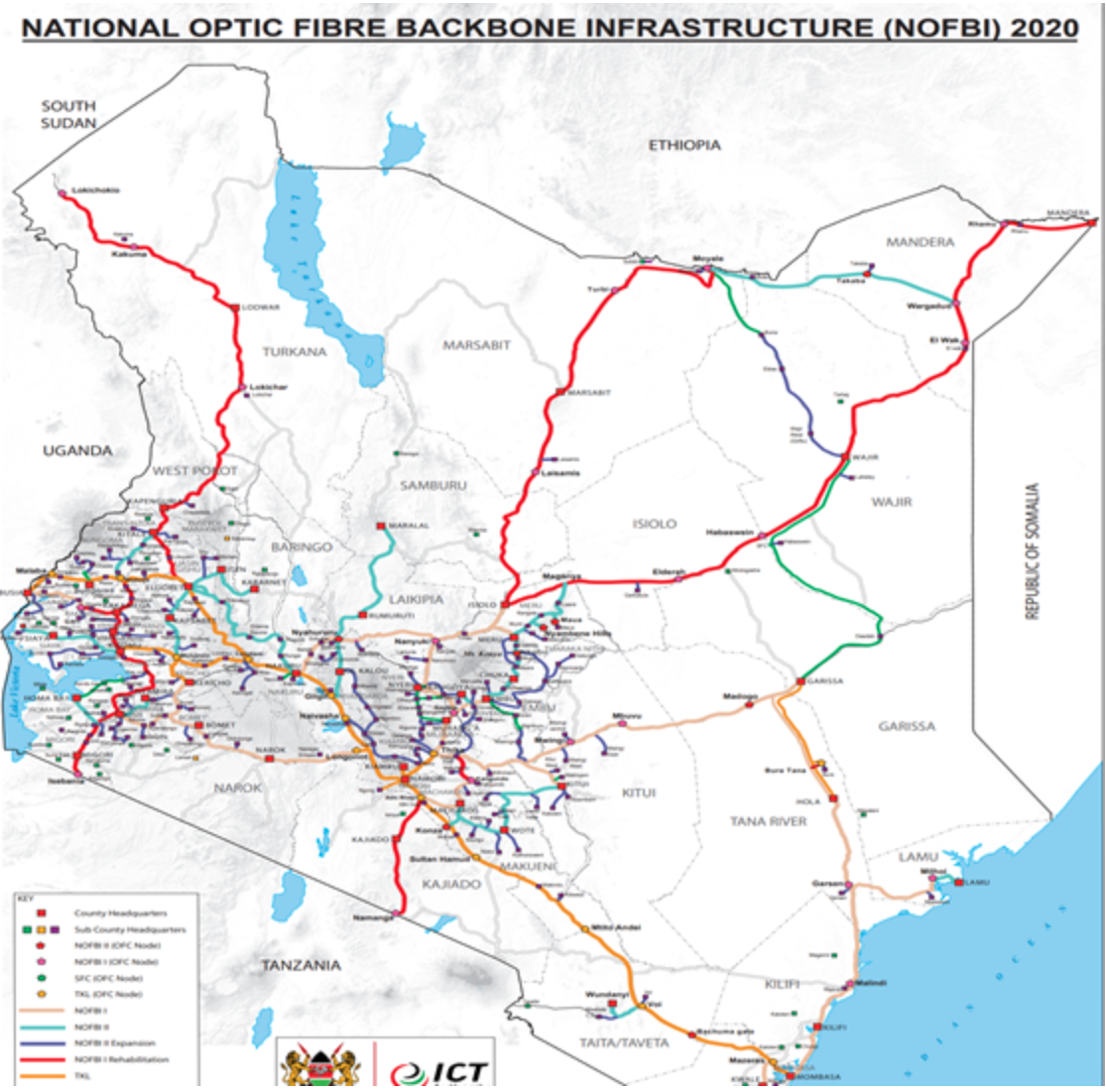 METRO
In the last 10 years, the government has built a total of 534km of metro mostly in the Nairobi and County headquarters mainly connecting key public institutions and offices to offer service delivery. Due to metro connectivity challenges and the need for interconnectivity in public institutions, there is a great demand for the government to expand metro connectivity for effective service delivery as per the Sustainable Development Goals (SDG), Digital economy blueprint, National Broadband Strategy 2018-2023and Smart Africa 2063.

LAST-MILE
The foundation of ICT infrastructure is physical connectivity. That is a combination of First Mile, Middle Mile, and Last Mile. First Mile is the underwater cables, the Middle Mile is the backbone and metro network along with transmission and core network, and the Last Mile is the final connection to users. The Last mile connectivity aims to ensure that national, county and other government institutions are connected to the backbone network for the delivery of digital services across the country.Â

Users have a centralized directory that can be used to access other users in other Government offices. There are currently more than 11,000 users onboarded across all 47 County Offices.

How can we help you today?

write to us call us faqs